Home About Us Benefits Buy Pens News Contact Us 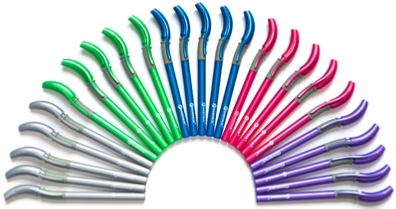 when buying your pens and receive 10% off

when buying your pens and receive 10% off

A touch of the write stuff about Amy’s pen

Pictures of the Swanneck Pens at the GESS and NEC show

Swanneck Pen in the Khaleej Times Newspaper in the UAE

Fancy a diamond-studded pen for your next big meeting? British designer Ian Towning has brought to Dubai a

Swanneck Pen is exhibiting at the GESS Show trade centre

We will be exhibiting their innovating Swanneck Pen range on stand D40, between 4-6th of March 2014

Our new Swanneck Antimicrobial is rank 95 of all stick ballpoint Pen on amazon.co.uk

Swanneck trademark has now been registered!

On the 2nd August 2013 Swanneck officially won Stabilo International for the trademark we deserved.

Stabilo international were opposing our registration with the patent office.

Check out  a new site about British toys and gifts,

The Britag site is here to showcase the many and varied products that are invented and created by people in this country.

Swanneck Pen mention in the Stationery magazine article for back to school.

Swanneck Ltd will be exhibiting at the Stationery show London business centre in April 23-24 2013.

Innovation for the 21st century

Swanneck Ltd will be exhibiting at the Stationery show London business centre in April 23-24 2013. in Stationery week.

Swanneck Ltd exhibiting for the first time at Paperworld in Dubai trade centre.

NOW the Swanneck Jingle with a video

I will teach the world to write video

Famous People That are Left Handed

The Song is called I will teach the world to write

Swanneck is offering customers purchasing any Swanneck pens order on our website, a free

pack of three Swanneck refills. This offer is only valid with any Swanneck pen transaction which is made

Design’s of the Swanneck Pen Poll

to vote for your favourite colour. We appreciate your feedback.

purchasing Swanneck pens on our website a Buy One Pack of Pens And Get Free Pack of Two offer.

Your free pack can then be given as a present to a fellow Left-Hander of your choice.

Below is an article from the Stationary Magazine July/August 2012

and smooth for left-handers. Research now shows the pen is just as effective for right-handers and

people writing in Arabic and other right-to-left languages.

When we talk about common school stuffs, they say, pencils are made for kids while pens are for adults.

Perhaps since a pencil is ended with an eraser, and so, kids are then allowed to have access removing

their childish errors more easily. Whereas for adults using pens on permanent ink, every action that has

been made is now hard to get rid off; hence, it should be used with genuine responsibleness.

I have wanted to review the Swan Neck Pen for sometime now.  Ever since I reviewed the Yoropen

they said it is constructed more specifically for the left hand writer.  So I was curious why there was such

loyalty to this particular writing instrument.

An inventor interview with Tony Hemmings inventor of the Swan Neck Pen, which is designed especially for

left handed people. Tara: What were the most difficult elements of bringing The SwanNeck

Tony: Without doubt the most difficult element in bringing the Swan neck pen to the market has been

reliable manufacturing.  As mentioned earlier, we have tried with many manufacturers who have not

recognize the potential of this product and have therefore not been prepared to cooperate with us.